For a little while now I’ve noticed that I’ve been getting an asymmetric waveform after processing my audio. At first I suspected DC bias in the recording chain but the original waveform was symmetrical. This told me that the DC bias was being introduced during audio processing.

After researching this I found out the culprit and made a minor change to my audio processing which achieves the same as before but leaves the waveform symmetrical.

When you record, either in stereo or mono, the waveform has a central point. You’d expect, on average, the recording to extend as far up as it does down and vice versa. If you are recording and get a non symmetrical waveform then you do have some form of DC bias in your recording chain which needs identifying and fixing.

My waveforms were being recorded symmetrically but by the time I’d run them through my audio processing effects the top of the waveform extended much further up than the bottom of the waveform. This effects things like normalisation and compression as these work on both sides, positive and negative of the audio, so if the audio is non symmetrical, normalisation and compression will not be as effective.

The culprit I found was the parametric equaliser when used to take care of the bass roll off. The human voice contains no “data” of any value beneath 80hz and generally that area of audio is just bass rumble. It’s for that reason that I and most audio producers will roll off anything beneath 80hz from any voice that they’re working with.

At first I used the scientific filter to remove this unwanted low end audio before switching to the parametric equaliser and putting the high pass filter in there. (A high pass filter sets a frequency and allows all audio higher that frequency to pass through while filtering out everything lower).

I would recommend everyone removes the sub 80hz frequencies from any voice they’re working with and while my parametric equaliser settings may be a starting point for you please remember to set your own equaliser settings based on your voice and your microphone to make it sound best. 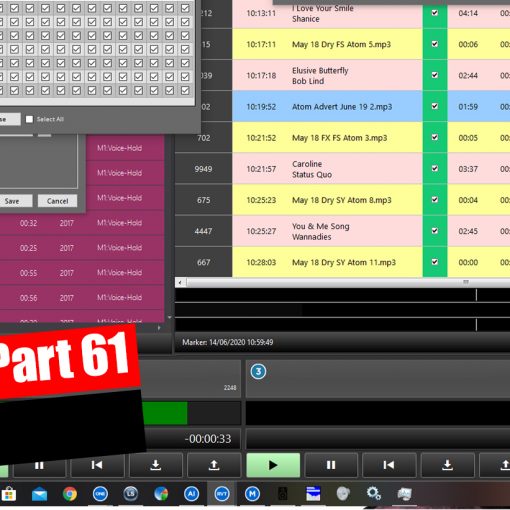 Today’s Audio Journey is specific to radio presenters and looks at the art of voice tracking. Modern techonology allows for more radio […]

This time we look at something I’ve had a few questions about and that’s the speech volume leveller. It’s essentially a compressor […]