As the audio journey continues we’ve looked at recording space selection and also microphones so now we move to the next logical choice and that’s how you connect your microphone to your PC.

Assuming that you’ve bought a traditional microphone with an XLR connection and not a USB microphone you’ll need a way to get your speech into your DAW (Digitial Audio Workstation) or possibly for live streaming.

An interface is a little box that connects to your microphone via XLR and to your computer via USB to get the sound from your microphone converted to digital and into your computer. From there you can then record it in your DAW or stream it via OBS Studio, Wirecast or whatever your live-streaming software is.

A mixer may be an alternative to an interface if you’re thinking of Podcasting, live-streaming or other live broadcasting where you need live control of multiple audio sources. That said you can record a multiperson podcast via an multi-input interface.

The interface I started with is the Focusrite Scarlet 2i2. It’s a pro-sumer interface that allows for the input of two mics or audio sources into the DAW. It can provide 48v phantom power, has a headphone jack with a direct monitor function meaning you can hear what’s going on latency free. There’s outputs for your monitor speakers as well and a separate volume control for your headphones and speakers.

If you’re looking further down the budget there’s the Focusrite Solo which allows for a mic and an instrument to be connected. Again it provides 48v phantom power so if you’re just doing voiceover or a solo podcast this may be the interface for you.

Lots of other manufacturers make interfaces too. The pro-sumer market has an abundance of choice for those starting out and as your needs grow there’s a market of even higher quality interfaces available.

There are two very important considerations in an interface once you’ve decided on the inputs and outputs you require. Those two considerations are does it provide phantom power and how good are the pre-amps?

Phantom power is necessary to get any sound from most condenser mics. If you’re using a Rode NT1 or a Neumann TLM103 then you’ll need power.

The actual output of a microphone is very low so that’s why you have to consider the quality of the pre-amps. There will have to be some gain boost added for most condenser microphones and significantly more gain is required for most dynamic microphones.

Every microphone has its own noise floor but with some of the cheaper interfaces, where the quality of the pre-amps aren’t great, you end up introducing hiss into your recording as you boost the gain on your interface. For dynamic mics in particular this can be a problem as they require more gain. I know many people who use the SM58 or SM7b with Focusrite interfaces and have the gain almost up full!

Now if your interface doesn’t have best pre-amps and you’re running a dynamic mic it may be that you consider adding a cloud lifter or a fethead into the chain between mic and interface. These are basically devices that add a gain boost to your record which they guarantee to be clean gain (without hiss) meaning the pre-amp in your interface has less work to do.

Let’s take a look at some interfaces available.

One of the most common used interfaces. Provides 48v phantom power, enables two microphones (or instruments) to be connected, headphone port, monitor outputs, independent volume controls for both and direct monitoring.

Cut down version of the 2i2 with one microphone input (with 48v phantom power) and one instrument input.

More targeted at musicians than podcasters or voiceover artists, two microphone inputs with four other inputs for instruments to be connected.

Focusrite interface with some built in processing as well.

Another option of getting your audio in to your digital audio workstation is a USB Mixer. Perhaps overkill for a voiceover artist but maybe an ideal solution for a podcaster.

Many mixers will provide the required 48v phantom power required to power condenser microphones and may be an ideal solution to mixing many sources for a multi-host podcast including sound effects etc.

One big consideration though is recording into your DAW. Using an interface in Audition you can record in multi-track with input 1 assigned to track 1 and input 2 assigned to track 2 allowing for easier editing. Depending on your USB mixer you may find you get one single out recording all sources onto a single track.

Some mixers to consider

Budget mixer allowing for a single microphone (with phantom power available) and various other line sources to be connected. USB output is a single track.

Ideal mixer for recording a podcast combining various sources. Four microphone inputs (phantom power available) with individual EQ and one knob compressor per channel. 16 inputs in total and on board FX processor as well as final mix EQ available and USB send and receive.

Premier USB analogue mixer with 12 inputs, ultra low noise pre-amps, and built in lexicon effects. What makes this mixer worth its price is the multi-track recording which your DAW can be configured to record each mixer channel as a separate input in a multitrack recording session.

Not something I’d recommend if you’re looking to do voiceover or voice acting work but if you’re looking for a portable recording studio solution for your podcast this may be worth considering. Can record multi-track output either to an SD card in the mixer or to your DAW.

One final thing to consider on getting your recording into your computer is your microphone cable. The obvious thing to say is that some cheaper cables introduce noise into your recordings so be careful when making your selection.

Also, be aware that if you have a condenser mic requiring phantom power then you’ll need an XLR to XLR lead to transfer the power to the mic. An XLR to TRS lead will work for a dynamic microphone as this doesn’t need power to be transmitted.

I hope this helps and if you need any further help on this, any part of your audio journey, or indeed any voiceover or production work please use the contact me page to get in touch.

Reverb is a very tight echo type sound that is the persistence of audio after it is produced. Listen carefully to a […]

Part 24 of the Audio journey focuses on distortion for production. Listen to radio station imaging and you’ll often hear distortion in […] 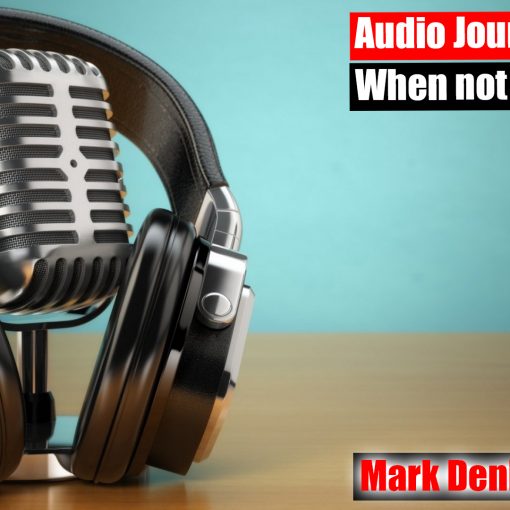 Everyone likes their voiceover read to sound, in their opinion perfect, and there’s nothing wrong with adding a bit of light processing, […]