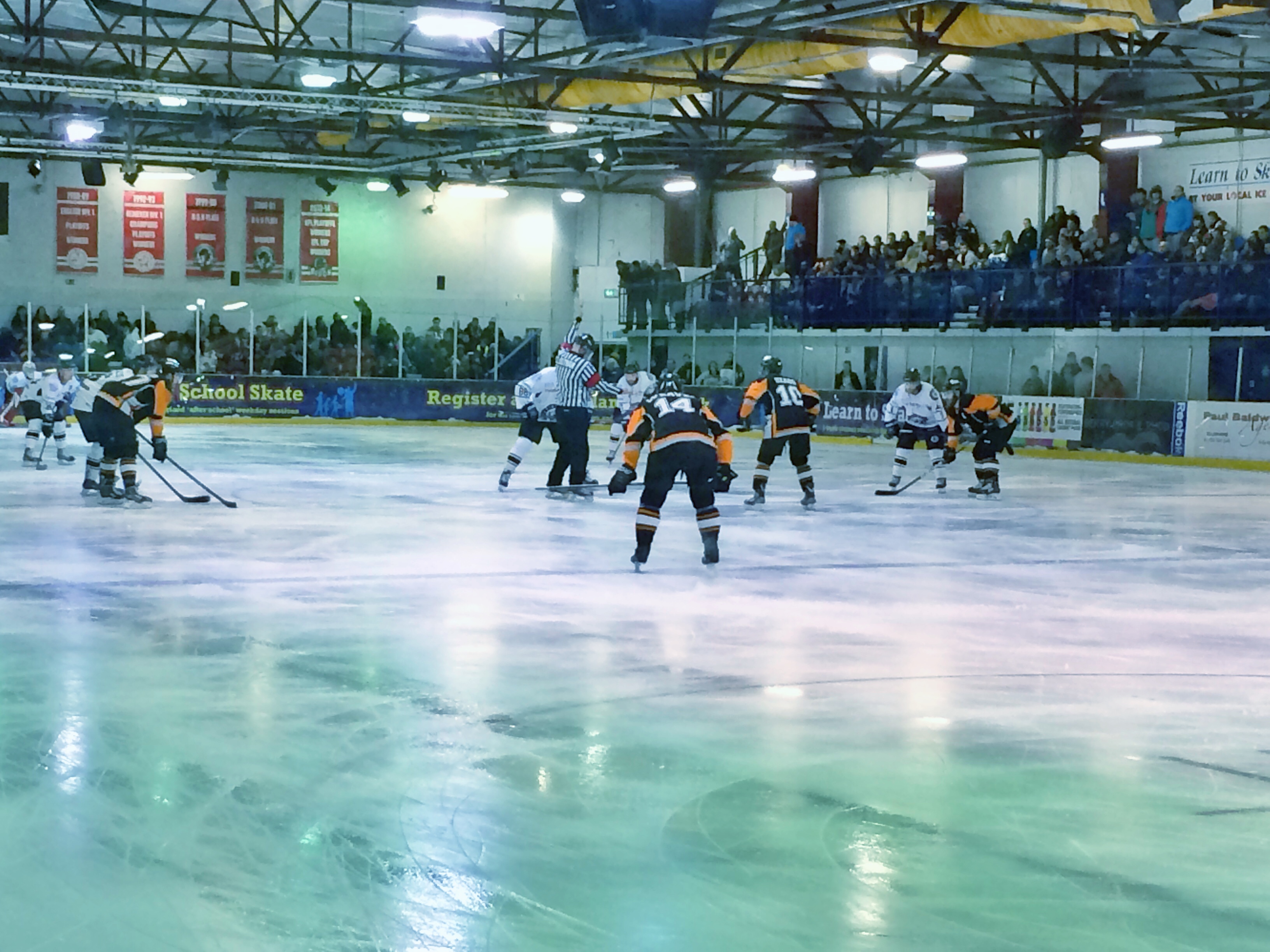 After a disappointing OT loss at Swindon with a goal scored apparently after the whistle it was back to home ice for the Basingstoke Bison for their opening home league fixture of 2015. 15th November, against Swindon was the last home win in the league although there had been huge blow out wins in the “Challenge” Cup against NIHL opposition in the interim period.

Telford Tigers, or Tigers Hockey UK as their website and social media has them known, were the opponents with the home season standing at 1-1, a penalty shot Bison win back early season and a 2-4 Tigers win at the end of November.

Bison were still missing Matt Selby through concussion symptoms and were also missing Captain Nick Chinn through illness. Tigers Dan Scott was also out through concussion. Dave Cloutman was the man allocated the arm bands for the game. 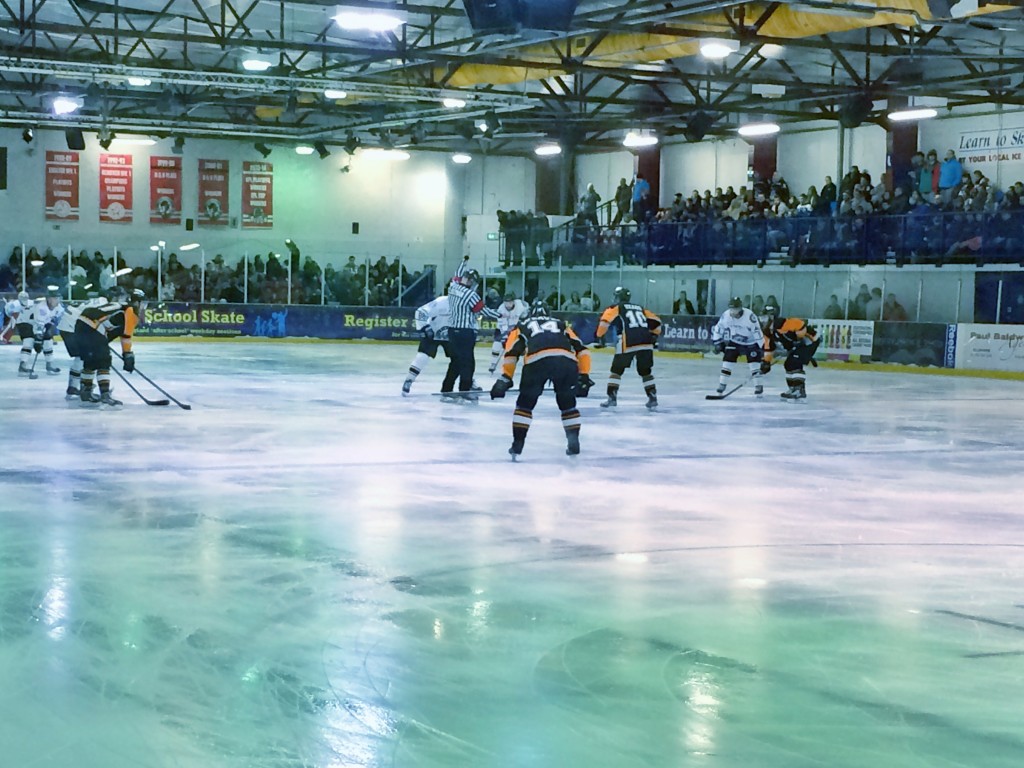 The first period was a great display of hockey. Bison hadn’t had a lay off and it showed in their play. They were sharp, fast and well skilled. Passes were tape to tape. The Tigers were everything the Bison were but if you rated the first period Bison performance at 100% then the Tigers would rate at 90%. Two quality teams going at each other in a well refereed period, both netminders looking good and making some big saves. In the last meeting between the teams my opinion of Murdy had increased greatly, he had been the sole difference that won the Tigers that game but in this game he wasn’t quite as assured. His defence worked well with him though clearing away rebounds but Basingstoke pressured him and his defence well.

The first period time in the attacking zone had been won by Basingstoke. They set up play after play in the attacking zone while the Tigers failed to maintain the same sort of pressure around Dean Skinns. It was a special teams goal that broke the deadlock, Bison getting the first powerplay of the game when Jonathan Weaver was adjudged hooking at 6.09. The powerplay unit worked well, moved well, cycled the puck well and Captain for the night Joe Rand finished clinically at 7.03 to make it 1-0.

Rand’s goal would turn out to be the only difference between the teams on the scoreboard after the opening 20 minutes but it was a period for the Bison to be proud of. They outworked the league leaders, outshot them and outscored them and deserved their 1-0 lead at 20 minutes.

Period two showed a complete swing from period one. Momentum is key in hockey and the Tigers snatched it in period two. They were now the team at 100% and their increase in standard started to force errors from the Bison. Marcus Maynard, Dan Davies and Rick Plant combined for the equalising goal just 3.47 into the second period, the Bison defence allowing too much room and Rick Plant forcing a back handed shot past Dean Skinns. It was a disappointing goal, there had been opportunities to break passing lanes, Plant was left alone in front of the net but his shot lacked great power as it came off the back side of the stick but still it was enough to find the back of the net. Bison weren’t without chances in the second period as the ringing of the Tigers’ net pipework proved late on in the period but the second period belonged to the Tigers, they had outshot, outworked and outscored their opponents this time setting up 1-1 at the second interval. There had also been luck for the home team, rebounds fell luckily away from Skinns, a few “lost” pucks on less than convincing safes proved safe too.

Backhanded shot from Plant made it 1-1 early on. A few lucky escapes for Skinns kept it so. Not the fluent Bison period like the 1st #epihl

I wrote at the time on Twitter that period 3 would produce an exciting game and that Bison had the potential to go out and win it in regulation. My pre-game prediction had been an OT win for Basingstoke, my two travelling companions had gone for wins for the visitors.

The third period started scrappy. Neither team was firing at 100% now, the passing wasn’t as crisp, the skill level didn’t appear so high. That takes nothing away from the game, the first two periods had shown each team at their best in a period each, the third period showed two very good teams giving their all for the win. What was clear to see was how much the win meant to the Bison, they gave their body to block shots and passes when Telford gained the zone and that kept the opening 10 minutes of period 3 scoreless.

As Peter Szabo caught Ciaran Long in the face with a high stick at 49.01 Bison had a golden opportunity to take the ascendancy with a powerplay opportunity. The Bison man returned to the ice straight away and after a couple of speculative attempts around Tom Murdy Telford gained the Bison zone, and despite being a man short Jonathan Weaver found Dan Davies alone in the slot and the former Slough man finished the pass at 50.05 for a 1-2 visitors lead. It was a good goal from Davies, good work from the Tigers and a momentary lapse of concentration from the Bison allowing 5 men to not mark 4 men had been punished.

1.05 was all that passed before it was 2-2 as the Bison proved if you get the puck to the net good things can happen. The powerplay had ended by 9 seconds but Basingstoke were already in the zone, they were working well, players finding good positions and eventually Joe Greener took a feed from Tomas Karpov and found Joe Rand who beat Murdy for the second time on the night and it’s 2-2 with 8.50 left to play.

Chances came at both ends during that 8.50 but neither team could do enough to deny the healthy sized crowd an overtime period.

The five minutes of 4 on 4 hockey was left to flow by the referee. He had had a good game so far, called what needed to be called and managed the game well and the extra time period wouldn’t change that. Tomas Karpov came closest as he rung the post with 12 seconds left, Murdy left stranded and only the metal work denying the home fans the chance to celebrate before penalty shots.

I’m no great fan of penalty shots, I don’t see a need for them in a league game where there are 48 games to decide positioning but the EIHA insist on them being there so that’s where the result would be decided.

Joe Rand, the double goal scorer, went first and fired a low shot past Murdy for 1-0. Peter Szabo went second, his shot at the far end appeared saved at first before the goal light eventually came on meaning it was 1-1 after the first round.

Ciaran Long, who I rate as the best penalty shot taker in the league stepped forward second for the Bison, he advanced to the net in his trademark way but rather than bemusing Murdy for 2-1 he managed to mishandle the puck totally and it trickled away harmlessly wide of the left post. You’d usually bet money on Long scoring but his miss wasn’t capitalised on as Jason Silverthorn, rated by many as the best import in the league, fired his shot straight into the chest pad of Dean Skinns and 1-1 remained after round 2.

The final round before sudden death saw Tomas Karpov take the puck. He moved quickly towards the net and beat Murdy with a deceptively powerful shot. His goal was a thing to watch the highlights for, it’s how penalty shots should be done and the pressure shifted to Scott McKenzie to keep the game alive. His shot failed to light the goal light and the Bison celebrated their first league win at home since November 15th and a 2-1 home record over the league leaders.

We saw two totally different Bison sides in the game. Period one showed us the confident, dominant Bison who attacked well and defended well when they needed. They played with confidence that allowed them to dominate the game. The other Bison we saw were the battlers. The Tigers stepped up a gear for period two, the Bison grafted well now. They played the body well, sacrificed their own bodies to support their goalie but what showed through most is how a team written off by some can pull off a big win under the pressure of an expectant big home crowd.

The Tigers will most probably still go on to win the league from here. They remain 10 points clear of second place with 20 games left to play. It’s not an insurmountable margin for Guildford to come back from but as well as the Flames, currently in second, playing well and winning their games they’ll need other teams to do them a lot of favours and take points from the Tigers. If you’re a Tigers fan it’s not time to celebrate yet but you can still be positive that your team leads the league comfortably and looks to be closing in on their first success for many years.

For the Bison it was a good win. A losing streak is a hard one to beat. Yes there had been home wins in December against the NIHL opposition but as the mis-named Challenge Cup has proven that’s not been hard for most EPIHL teams but where it mattered in the league the Wildcats visit of November 15th had been the last time the Bison had left their home ice with two league points from a game. Matt Selby is still hoped to return after consultation for his concussion symptoms and Captain Nicky Chinn also will return to the line up soon making the team more experienced and all round stronger.

Doug Sheppard proved at Basingstoke last season he can close out a second well with two trophies collected. He proved in his sole year coaching at Slough he can do the same as despite the disruption of unwanted interference he pulled the team together, closed out the league well and lifted the play-off trophy.

The Peterborough Phantoms, sans the by then departed Alan Lack, will be the next home opponents for the Bison and that’s also a home series that stands at 1-1. 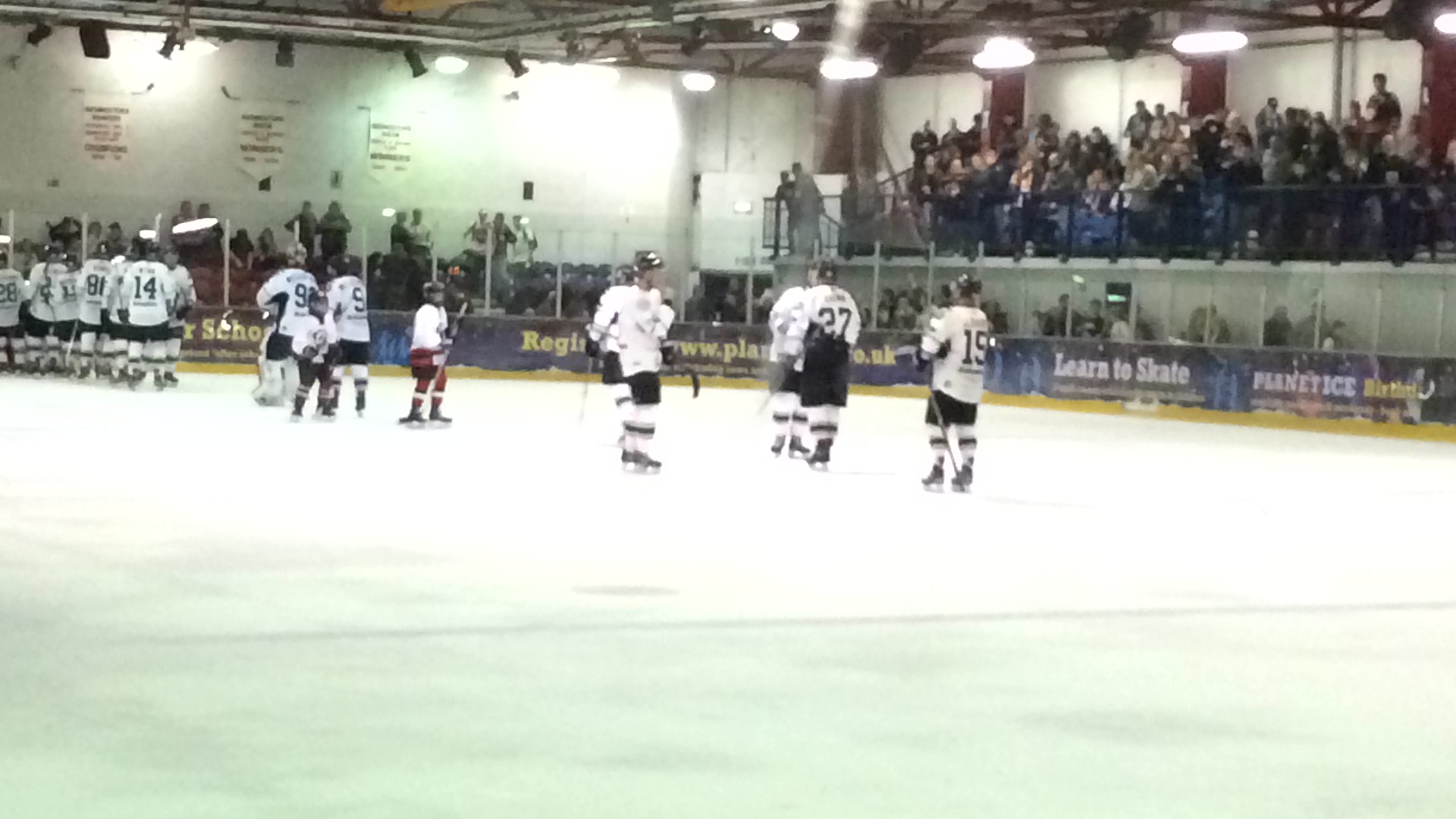 For the second week in a row the road trip destination was Basingstoke where two contenders would do battle. The Bison didn’t […] 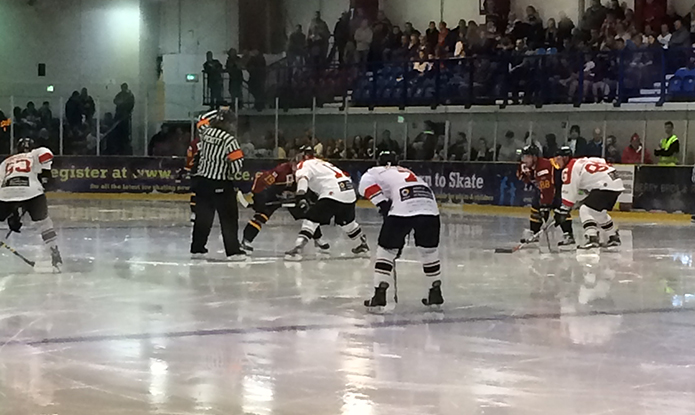 Pre-season continued as the Bison welcomed the Flames to their rink in a local derby. The second of a four game pre-season […] 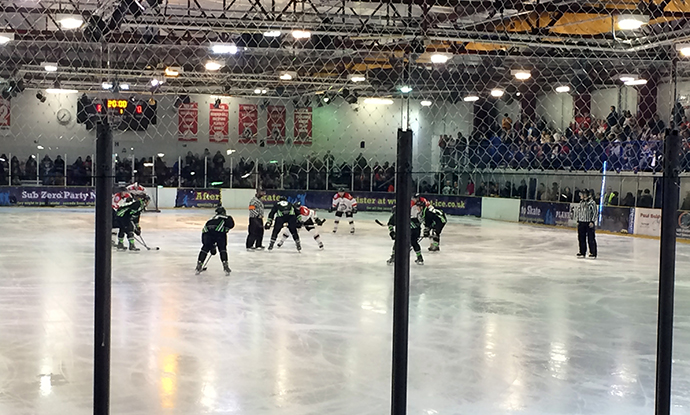