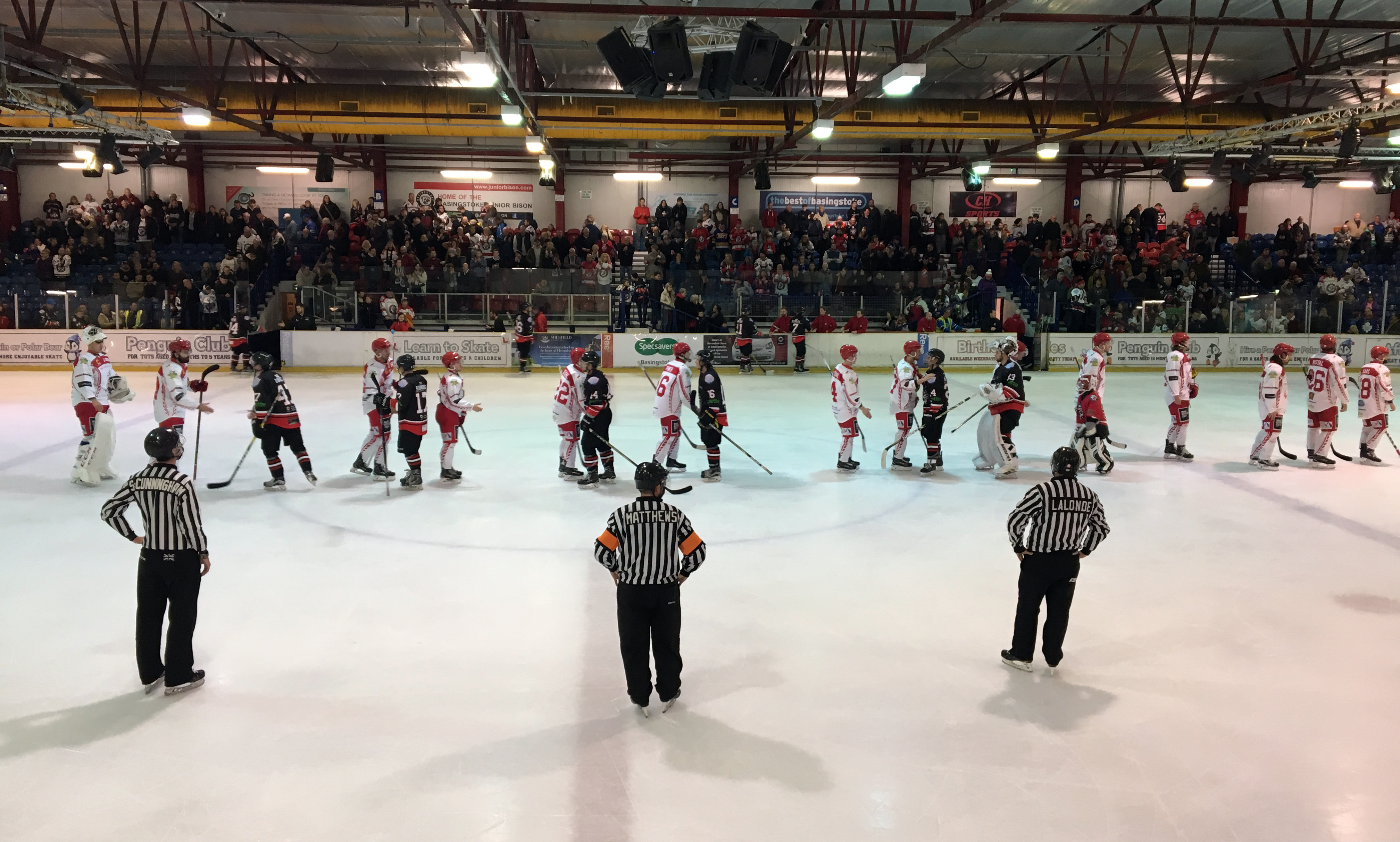 Saturday night was once again hockey night in Hampshire as the Basingstoke Bison lined up against the visiting Swindon Wildcats.

The Bison were once again short benched as a full strength Wildcats rocked up. Stephen Matthews was the man in charge with Justin Lalonde and Flynn Sitch-Cunningham on the lines.

The game was off at fast pace and Dean Skinns was called into action early as Chris Jones forced his way up the ice and tested the Bison shot stopper. Dan Scott was the first to test Renny Marr in the Wildcats net and he came up big denying the defender’s booming shot.

A promising run by Aaron Connolly ended with him in a heap as his blade gave out under him and he was helped from the ice coasting on the remaining blade. Bison forced some sharp stops from Marr before Elliot Dewey got a stick in the passing lane to break up a good attacking rush from the Wildcats.

Basingstoke got the game’s first powerplay when Sam Bullas slashed Grant Rounding at 9.10. Bison were attacking and just in front of the crease was Vanya Antonov who ended up called for a high sticks minor on Renny Marr levelling the game at 4 on 4 at 9.48.

Just under a minute later Bison were back on the powerplay as Maxim Birbraer sat out for hooking at 10.30 meaning 4 on 3 in favour of the Herd. A good short poweplay saw nothing put on the scoreboard before 4 on 4 which wouldn’t last long as Roman Malinik took a high sticks call at 11.17 resulting in a 4 on 3 advantage for the Wildcats.

The game’s opening goal came swiftly off an offensive zone face off for the Wildcats. Aaron Nell won the face off back to Chris Jones who found Sam Zajac and his high shot was over Dean Skinns on the stick side bulging the twine at 11.28.

As penalties began to expire Swindon went back on the powerplay as just Roman Malinik remained in the box. It would be on this powerplay that they’d double their advantage 1.18 after their opener. While the first Wildcats goal came from a clinical play their second came on a much scrappier play when a speculative pass found Jordan Kellsall who released quickly and in.

Vanya Antonov blocked a shot from Sam Godfrey and quickly transitioned but a pad save from Renny Marr ended that chance. Dan Scott blasted a shot in on net which hung around in the crease in front of Renny Marr but just out of the reach of the hopeful Tomas Karpov looking to snuffle home the rebound.

After some end to end play Wildcats secured their third of the period with28 seconds left to play. Once again a good passing game fed the puck to Maxim Birbraer who slid through the front of the net lifting the puck in high at the last moment for 0-3.

Bison had set themselves a difficult task coming back from a 3 goal first period deficit but worked hard on it through the final two periods. They would come up against Renny Marr in top form though!

Vanya Antonov drove to the net early in the second period accompanied by Dan Davies but the former’s shot was saved and rebound was tantalisingly out of reach for the latter. Roman Malinik followed this up moments later with a wrist shot but a glove save by Marr dealt with that. Promise of a come back kept up with Antonov to Davies to Karpov but his shot was also saved.

Sam Bullas forced Dean Skinns into a save but as play returned to the other end Chris Jones shoved Tomas Karpov off the play but this didn’t stop his line mates advancing as Davies and Antonov combined but again met Marr. A string of Bison chances were all ended by saves from Renny Marr. While the majority of the saves were good one looked to be a huge slice of luck as while the netminder searched for the puck after a Tomas Karpov shot the whistle blew confirming his save.

With 48 seconds left in the middle period Jordan Kelsall collected a slashing penalty meaning the Herd would end the period on the powerplay but by the time the end of period buzzer sounded there had been no scoring and the score remaining 0-3.

The third period started with 1.22 left on the powerplay for the Herd. Wildcats returned to full strength with no scoring on the man advantage. Even strength didn’t last long as Joe Baird was called for slashing at 42.25. Wildcats centred the powerplay around Arron Nell who twice was denied by pad saves and the third shot ended with a blinding glove save from Dean Skinns. Roman Malinik broke shorthanded but again found the Wildcats netminder in top form.

Even strength again didn’t last long as Sam Zajac’s attempt at stopping a Bison break ended with him sitting for hooking at 45.09. As Bison looked to work the powerplay Steve Whitfield took out an advancing Tomas Karpov earning himself a tripping minor at 46.21 and giving the Bison a 5 on 3 advantage for 49 seconds.

Dan Scott almost breached Marr’s defence but Bison were closest to scoring when Tomas Karpov did beat Marr but the Wildcats were saved by the ironwork. Both Wildcats penalties expired with their net still unbreached.

With 6.07 to play and a board battle in the Wildcats defensive zone there was a nasty hit laid which saw Floyd Taylor leave the game with a 5+game for boarding. It was on this powerplay that Bison broke the deadlock as they cycled the puck round to Dan Scott with it finding his hitting zone as he unleashed a blast from the hash marks for 1-3 at 54.16. As the Bison celebrated their goal the Wildcats bench called their timeout.

With the goal coming on a major penalty that 5 minute powerplay continued and the Herd were on a 5 on 3 when Steve Whitfield was called for slashing. As Jan Kostal blocked a shot and play stopped Doug Sheppard called the Bison time-out .

Dean Skinns left the Bison net at 57.51 having faced just 3 shots in period but despite the extra attacker the Wildcats weathered the sustained pressure and held on for a 1-3 win.

Swindon played two different games. In the first period they were all over impressive, in the second and third period Marr continued to be impressive while the rest of the team closed down. They created 12 shots in the first period and half that number in the second and third combined. Renny Marr however was superb in the Wildcats net, tested 35 times and only beaten once. A number of those shots were quality shots as well but time and time again he made the big saves at the crucial moments.

A combination of good aggressive Bison play and total defensive Widlcats play restricted the Wildcats to just 3 shots in the second and third periods but by then it seemed clear the tactic was just to defend the three goal lead that they’d already built.

Bison have played many a team from last season’s NIHL of late and have taken them on short benched. The team are yet to ice the full roster this season and against the original NIHL teams have got away with. Against Telford last Sunday the team was horribly short but managed to secure the win. Against a quick Swindon they got caught out early and that had them on the back foot by the end of the first period.

The Wildcats took their chances well in the first period then played a pretty boring game for 40 minutes. They showed little intent on scoring and were content on shutting down the Bison. Their goaltender was hot and he allowed them to play the game that way.

If you’re being hyper-critical Bison managed, in the second period alone, the same number of shots the Wildcats managed in the whole game. The difference being the execution of the shots. The Wildcats scored three good goals, the third goal was very well worked and the shot in particular. Bibraer got in close then roofed the puck. Jones roofed the puck for his choice too. Marr was in good form for the Wildcats but a lot of the shots were low and pad saves, or those that were off the ice were at the chest easing the save for the goaltender. Chances have to be converted. Bison did have their chances but Marr was on form.

Swindon closed out the game well after an impressive first period. It was the first serious test on home ice for a long time. Short benched it was always going to be a huge ask to take on a former EPL side and one of the calibre of the Wildcats with their roster this season. 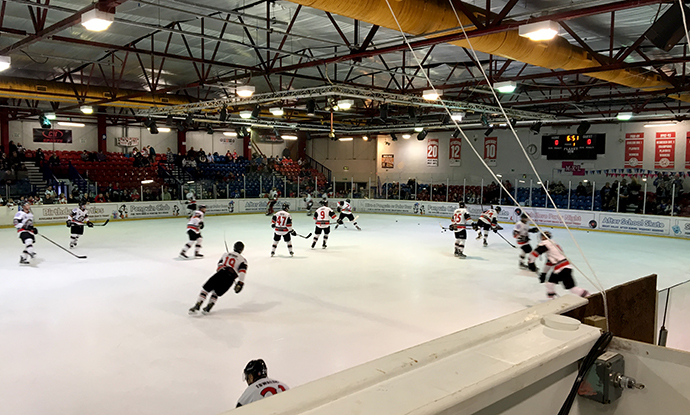 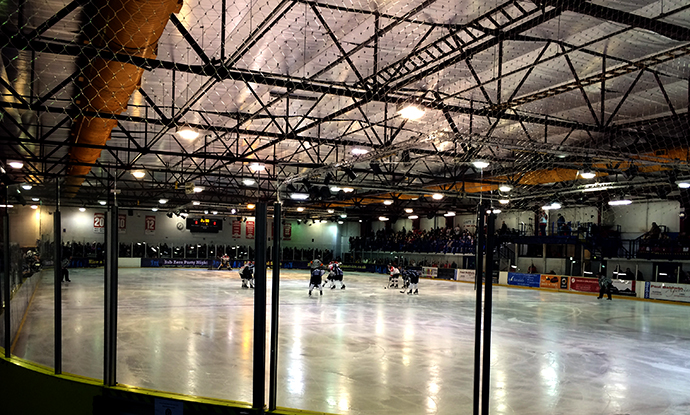 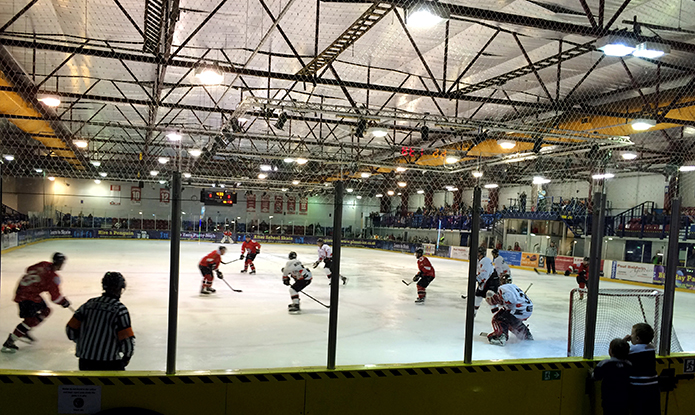 With a 100% home record to protect the Bison took to the ice to take on the Phoenix. As is always the […]