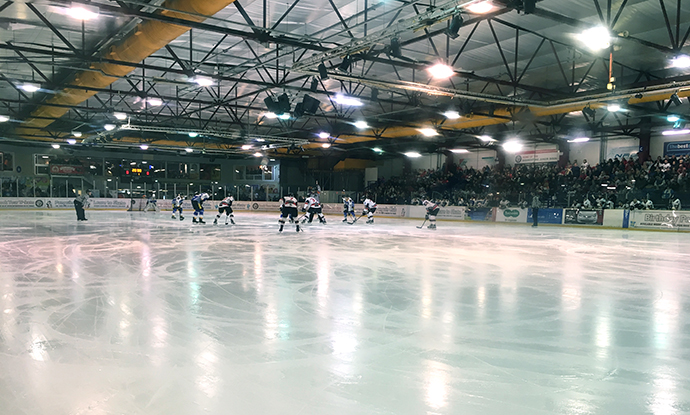 After starting the year with a couple of road games the Basingstoke Bison took their place on home ice for the first in 2017 and welcomed the Peterborough Phantoms.

Bison welcomed back Joe Rand giving them a full complement of non EIHA trained players but were still without Joe Miller. The Phantoms absentee list was a bit longer with Norton, Russell, Weldon, Levers and Auzins all missing. With the starting goaltender scratched Adam Long got the nod against the Herd.

Tim Pickett was the man in charge with Cook and Sitch-Cunningham on the lines and it was the referee who called the players to centre ice and got the game underway.

Derek Roehl demonstrated his skill early on easily getting the puck into a shooting position rounding a defender but the defender then stopped him getting away a clean shot. Tomas Karpov and Grant Rounding headed in but after a wide shot Bison held the puck in the zone and Karpov found Matt Towalski who shot at the goaltender and the save was made.

As the period moved on Tomas Hiadlovsky faced a rare first period shot from Petr Stepanek but the Bison goaltender made the save.

At 4.03 Bison were ahead thanks to Rene Jarolin. Good work from Derek Roehl and Aaron Connolly got the pressure on around the net and Rene Jarolin picked up the loose puck and made use of the traffic to fire in screened for 1-0.

Now ahead in the game Bison dominated the next period of play as Karpov laid a perfect pass from behind the net for Joe Rand but he didn’t connect. Vanya Antonov then found Ciaran Long but Adam Long extended his pad for that save. Derek Roehl was at the blue line when he let off the next shot but he was denied by a glove save.

As the Bison dominated the opening 10 minutes of the game the Phantoms recovered from their slow start and starting coming more into the game but this didn’t stop some more great chances for the Stampede. Karpov fired to Dan Davies in the slot but the Phantoms defence pressured his shot wide. Joe Baird then fired from the blue line and Karpov’s tip just missed for height.

The teams traded chances next as Karpov passed to Rounding but the incoming player couldn’t get his stick free. Then Wehebe Darge made his way past Kurt Reynolds but his feed was short of Darius Pliskauskas.

With 50 seconds left in the first period after more good Bison play Matt Towalski was battling with Thomas Stubley in the corner but ended up with a holding penalty.

With nothing made of the 50 seconds of powerplay the first period ended with Bison holding their early 1-0 lead and a comprehensive 10-3 shot count.

Phantoms started period 2 with 1.10 left on the Towalski penalty but before anything notable had happened he returned and the game went back to 5 on 5. Back at 5 on 5 Derek Roehl fed Vanya Antonov but Adam Long flashed a glove and deflected it away for the Phantoms to clear their zone. Shortly after Tomas Hiadlovsky denied Bradley Moore at point blank range.

It was penalty time again at 24.37 when Dan Scott took a roughing call but as Ciaran Long looked to make something happen shorthanded Scott Robson got called for holding the stick sending the game to 4 on 4 at 25.22

Derek Roehl saw his attempt deflected up and out of play with a Phantoms stick in the way of his shot.

Dan Scott returned, swiftly followed by Scott Robson. Bison had failed to make anything of their short powerplay but it wasn’t long after Robson returned that it was 2-0. Rene Jarolin fed Aaron Connolly and he slotted it to Declan Balmer perfectly for him to release a blast.

At 30.03 Jarolin’s second made it 3-0. This time it was Derek Roehl the provider with some skill on show and then Jarolin shot low for the third goal.

Straight after Dan Davies fed Ciaran Long who then picked up his own rebound but his second attempt drew a whistle as the puck caught the netminder on the helmet.

Phantoms pulled a goal back with their first at 32.09. Darge got himself behind the net and fed a snap pass out to James Archer who shot high beating Hiadlovsky over the shoulder.

Phantoms were gifted an opportunity for 3-2 soon after when Stuart Mogg gave the puck away at the opposition blue line but fortunately raced back to get his own stick in between the puck carrier’s stick and the puck and deny the chance from being finalised.

At 34.50 with the referee’s arm raised for a penalty Adam Long pulled off possibly the save of the night to deny Aaron Connolly as he dived across his own net and flashed a glove. With the puck safely in the goaltender’s glove Tim Pickett could award Nathan Long the 2 minute holding penalty.

Adam Long had to remain sharp and pull off some big saves in the penalty kill, one of which he got help with from his defence to deny Vanya Antonov who was alone in front.

Phantoms returned to full strength as a long pass found Ciaran Long who drew a save from Adam Long.

Darius Pliskauskas was denied by a huge save from Tomas Hiadlovsky as the Phantoms pressed hard at the end of the second period. With time running out Ales Padelek lost the puck to Tomas Karpov but his backhand couldn’t get past Long and the period ended with Bison holding a 3-1 lead.

Period 3 again started well for the home team. Dan Scott got the first shot of the period before the Phantoms cleared the danger. As the Phantoms then looked to come at the Bison Robert Ferrara’s hopeful charge down the wing was ended by a beautifully executed hip check from Tomas Karpov who then gathered the puck to start a move the other way.

Adam Long and the Phantoms defence were kept busy, first by Derek Roehl, then Connor Stokes cleared the puck but only to Rene Jarolin who quickly set up Dan Scott forcing another save out of Adam Long.

After forcing a turnover Phantoms were off with Martin Susters trying out Hiadlovsky short side but his shot was too high. Thomas Stubley then sent in a blast but a smart glove save dealt with that.

Joe Baird fed in a chance for Derek Roehl to deflect but his deflection went over. When Ciaran Long sent off a Vanya Antonov pass this did draw a pad save from Adam Long.

At 48.55 it was powerplay time for the Bison. As Matt Towalski chase away a loose puck to attempt to nullify icing Nathan Long took the call for hooking giving the Bison a powerplay chance.

Bison rolled 5 forwards on the powerplay and played the system with relative ease. After 1.09 of the advantage the goal light was lit again as Rene Jarolin completed his hat trick. Ciaran Long blasted the puck on net, Adam Long made the save but left a rebound which fell for Jarolin to bat into the net.

A Derek Roehl roughing penalty at 50.35 gave Phantoms a powerplay of their own. Darius Pliskauskas fed Wehebe Darge but Hiadlovsky was square to the shot and deflected it up into the netting. It was Pliskauskas himself who came closest to scoring as he moved in front and took advantage of the traffic but the Bison shotstopper never once lost sight of the shot and a save was made.

As Roehl returned he did so with purpose lining up a hit on Darius Pliskauskas but the Phantoms forward saw him coming and avoided the incoming check.

After chances at both ends Bison made it 5-1 as Rene Jarolin claimed his fourth. As Roehl sent the puck across Jarolin fired high into the net at 55.15.

A never say die attitude from Phantoms saw them take the zone and put some pressure on the Bison which saw Joe Baird down and take a puck to the face. He made his way off the ice on his own and would later return for the handshakes.

A careless penalty by Stubley as he tripped Long sent Bison back to the powerplay and that was all the invitation that was needed to make it 6-1, Jarolin claiming his sixth point of the game as he fed Tomas Karpov who blasted the puck to the net back of the net at 56.15.

A late powerplay was on offer for the Phantoms when Kurt Reynolds took an interference penalty at 59.24 but the final 36 seconds were killed off and Bison started their home 2017 run in with a convincing win.

Hard to overlook the absentees from the Phantoms line up but all the same it had been a clinical performance by the Bison. They had created chances and they had taken those chances. It’s also hard to overlook Rene Jarolin on a six point scoring night but while he turned in a brilliant individual performance it had also been a very good team performance.

I overhead Rene congratulated after the game about his six point night and his reply was simply “Thanks, but it’s the two points that are important!” That says a lot about the mentality of a team after a win!

In mainstream sports like football and cricket players go through media training! This trains them how to answer questions in post match interviews and they’re taught to work questions back to the team rather than their individualism but there’s no such training in the EPL. Rene’s answer was just genuinely how he felt.

The Phantoms team is based very much around Auzins in net who is a proven game winner. Adam Long is one of the better back ups in the league but with the highly experienced Tom Norton also missing last night he was too often left exposed. He made some high quality saves but his defence failed to support him and a lot of the Bison goals came from very good scoring chances that the extra experience of Norton in defence may have decreased to lesser quality scoring chances.

Bison did what they had to do, they played the opposition in front of them and played them well. Phantoms head coach Slava Koulikov will be hoping his injured players return soon. 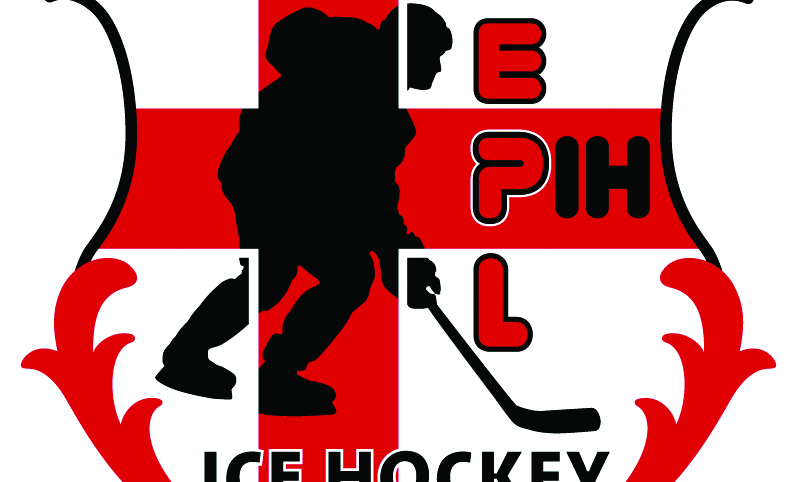 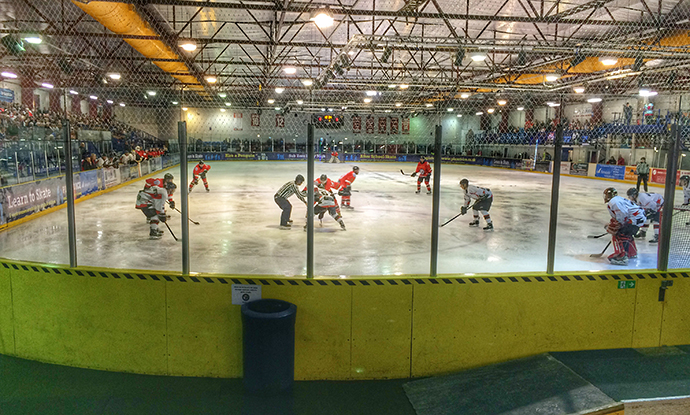 The question arises every year as to which is more “valuable”, the League or the Play-offs? Obviously in the case of two […] 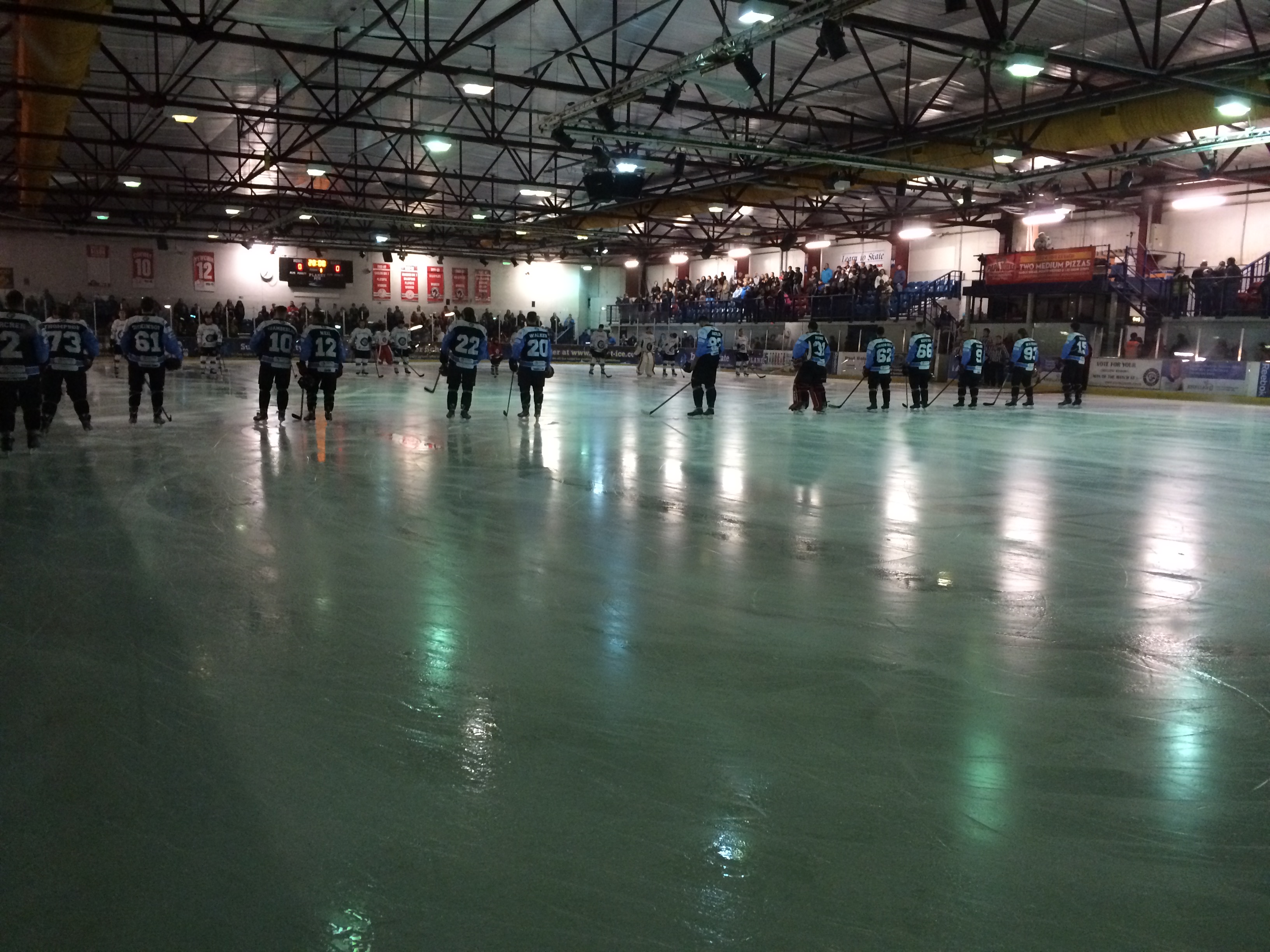